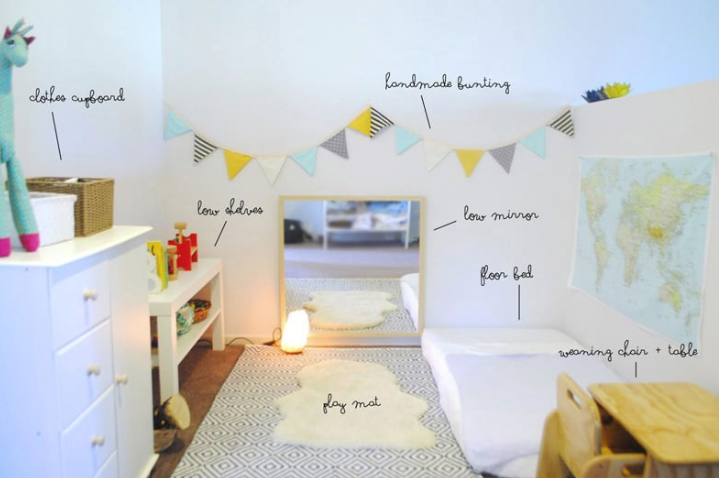 Parents are creating Montessori nurseries, home-school environments and making DIY inspired activities to do with their kids at home, whether they are in pre-school or public school.

What is the Montessori Method?

Developed in the early 20th century by Dr. Maria Montessori, an Italian physician and educator, the Montessori Method is a child-centred way of thinking about education and childcare. The method stresses independence, freedom for the child (within limits), and respect for the child’s development.

Considering the Montessori approach for your child? You don’t have to wait for preschool to begin encouraging your baby to think and act independently!  Turn your toddler’s space into a safe and independent learning environment with these tips for creating a fun and educational bedroom.

When it comes to modern living, how you use your space is as important as how it looks. Versatility and portability are prized. Whenever possible, invest in convertible, multifunctional pieces, such as cribs that transform into toddler beds and seating with storage.

If you aren’t familiar with the Montessori Method, the idea of a floor bed might seem surprising.

In a Montessori-style nursery, the child sleeps on a floor bed. Now, you can buy expensive floor bed frames; you can also do a cheap, DIY version by simply laying a mattress directly on the floor. Both work!

The idea behind a floor bed is in line with the general principles of the Montessori Method: a child should have freedom of movement, and should be able to move independently around his (carefully childproofed!) room. For this reason, a floor bed is preferable to a crib, since a crib restricts movement and limits independence. Montessori parents typically keep their babies in a bassinet or Moses basket during the newborn stage, but starting as early as 2 months or so, they transition to a floor bed. A teepee or A-frame tent is a very good transition idea. 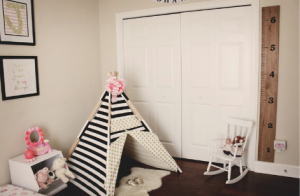 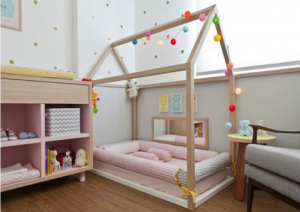 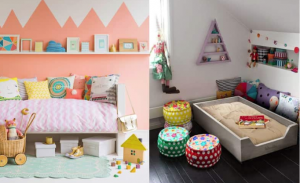 Montessori really supports the theory of less is more, everything in it’s place. High-contrast patterns and bold, primary colors may be good for development, but when it comes to the nursery, these elements are best left outside.

The child’s environment should be organized, clean and beautiful. The areas shouldn’t be cluttered with too many toys, as this is overwhelming to the child and rather than choosing something, they may simply walk away.  From a Montessori perspective the child’s wardrobe is so important. Selecting their own clothing, at least within a limited selection and allowing when appropriate the child to dress themselves.

If you want your little one to learn to function independently in his or her own space, you need to make that space accessible for them. Consider replacing big, heavy drawers with small, kid-friendly cubbies, and install a lower rail in the closet, so your kiddo can help pick out their own clothes. Easily accessible wall hooks are also a great choice. Even something as simple as a light switch extender can make a big difference to your toddler’s level of independence. I fully support that a minimal, well organised wardrobe works best for the child. I feel it’s also out of respect for ourselves and respect for our clothing. Clothes generally keep better if they are neatly folded or hanging with a bit of breathing space.  [sources: nursery.about.com]