If your child is looking for facts about teepees for a school project or just for interest, this page may be useful.

I craft and sell teepees as you know. As a result of this, I’ve taken a keen interest in the history of teepees.

Here are some of the facts that I’ve dug out that may be useful to you (You find more facts on Wikipedia, amongst others).

What’s the etymology (the study of the origin of words) of the word teepee?

Teepee comes from the Lakota language and it was actually spelled tipi or thipi in early English. It means ‘a dwelling’, ‘they dwell’, from the verb thi )to dwell)

Is a teepee the same as a wigwam?

No. The wigwam is a dome-shaped shelter made of bark layered on a pole-structure. It was mainly used in hunting camps. It’s the bark that differentiates the wigwam from the tipi (which is made out of skin). 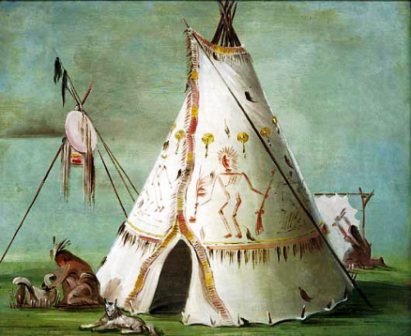 Who are the Lakota?

The Lakota is a tribe native to the United states and were/are found primarily in North Dakota, South Dakota, Nebraska, southern Minnesota and northern Montana. Their ethnicity is Teton Sioux.

The frame consists of 13 poles from 15 to 18 feet in length. PowWow Teepees only have four poles ;-).

The poles are tied together at the small ends and are raised upright with a twist so as to cross the poles above the fastening. They are then drawn apart at the large ends and adjusted upon the ground in the rim of a circle usually ten feet in diameter. A number of untanned and tanned buffalo skins, stitched together in a form adjustable to the frame, are drawn around it and lashed together. The lower edges are secured to the ground with tent-pins. At the top there is an extra skin adjusted as a collar, so as to be open on the windward side to facilitate the exit of the smoke. A low opening is left for a doorway, which is covered with an extra skin used as a drop. 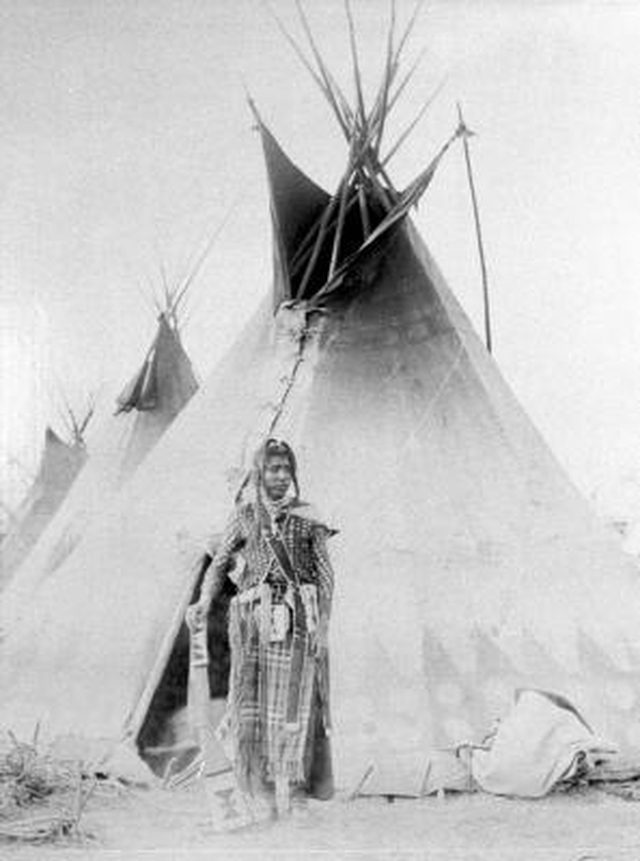 Lodgepole pine is the preferred wood in the Northern and Central Plains and red cedar in the Southern Plains. Tipis have a detachable cover over the structure. The cover has historically been made of buffalo hide, an optional skin or cloth lining, and a canvas or bison calf skin door. Modern lodges are more often made of canvas.

Interesting facts about teepees includes the use of ropes (historically raw hide) and wooden pegs are required to bind the poles, close the cover, attach the lining and door, and anchor the resulting structure to the ground. Tipis are distinguished from other tents by two crucial elements: the opening at the top and the smoke flaps, which allow the dweller to heat themselves and cook with an open fire; and the lining that is primarily used in the winter, which insulates. Tipis were designed to be easily set up or taken down to allow camps to be moved to follow game migrations, especially the bison.

More facts about teepees: When dismantled the tipi poles were used to construct a dog- or later horse-pulled travois (a frame structure to drag loads over land) on which additional poles and tipi cover were placed.

Tipi covers are made by sewing together strips of canvas or tanned hide and cutting out a semicircular shape from the resulting surface. Trimming this shape yields a door and the smoke flaps that allow the dwellers to control the chimney effect to expel smoke from their fires. Old style traditional linings were hides, blankets, and rectangular pieces of cloth hanging about four to five feet above the ground tied to the poles or a rope.

If you are looking for more facts about teepees check out Wikipedia.